Tomorrow's Our 26th National Day! and Falling in LIKE...

Hi All!!! As the title says it, tomorrow is National Day, for Brunei that is... Am i feeling patriotic? err not really... i've done my share of patriotism when i was younger... you know flag waving and stuff, plus i did march for the 24th National Day parade back in 2008 for the Brunei Association of Banks... We had to practice both day and night, just to march exactly like the police/army style... Not something i enjoy as i must say i have 2 left feet and i also have no rhythm! Lol! So dancing is also quite difficult for me... hahahah... lets not say dancing, trying to learn poco poco was difficult for me as well... hahahah... enough said. 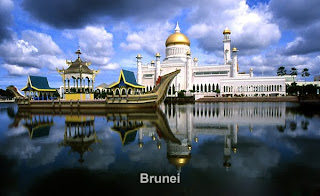 So what are my plans for tomorrow... well there is lunch at excapade at 1, my eldest sister is treating... so yeah... after that i'm not too sure what i'll be doing... I'll probably get leggings again... I actually got a pair yesterday, quite surprised they fit me, so i want to get another just in case it runs out... This is usually my normal routine, if a pair of pants especially jeans which fit me well, i always buy 2 pairs because of several reasons 1. in case i wear 1 of em out and 2. i know i will never ever find another pair like them anytime soon.

Ohh... i also went to miri last saturday, to accompany one of my close friend... she just got out of an accident 2 days before and she wanted so badly to go to miri, so decided to just bring her. I'm also discovering the joys of twitter too... it seems cool.. hahahah

Falling in like... hmmm... this actually means something, it's like falling in love but you don't love the person, you just like em... i think this could be defined as an infatuation or a crush... Am i crushing on someone? Yes, i am! hehehe... don't think he has noticed me... Don't know why but yeah, although i don't see him that often , i dunno i just think i like him... would i make a move? Nah! For me, why bother... I like keeping my options open ;) Anywhoos, today i saw a hottie at work! haha! i have not seen this guy before so i would consider him fresh meat to the building... hahaha... well it happened like this, after i parked my car, shah just came and parked beside me. so we walked to the office together... we were hanging around downstairs because shah was smoking and we were talking about bonus and things like that. I dunno what possesed me to turn my head and there he was wearing blue and he was walking to his car to take his diary... and i think he smiled at either me or shah... and i was like "Shah, who's that?" He's like "New collector" and i went "He's cute!" *pauses and stare* "he's hot!" . i must admit i did ogle at him for a bit when he came back from his car... i so need to see this guy close up on Wednesday to really take a good look at him! hahaha =) i heard he has a long name too but Shah says it's a nice name, so i'm like ok cool... heheheh... i sound like a high school girl all over again! And oh... he's not the one i'm crushing on ya... i have to scrutinize this one... heheh ;P

Ok i guess this is it for tonight... will blog more soon =D))

Good post and this post helped me alot in my college assignement. Thanks you seeking your information.