Hey all! hope all of you are doing good! Well as the title says, last weekend was crazy for me because i went to Miri, with them bankers to play paintball. It was fun!!! each player gets to play 4 games!!! Fun fun!!! i nearly fainted because i did not eat and i was lucky, one of my fren's younger sister saved me with her lollipop... hahahahah.... yes, one small lollipop makes a difference. if you are interested, you can visit their website here, but it has not been updated for quite a while, so it's best to contact Mr Liew via email or sms to get the rates. i got shot twice, yes only twice because i kept hiding behind the bunkers and only started shooting when no one was shooting at me.... i knew some of the ppl i was up against were quite frustrated with me because they could never get a good shot at me... hahahahaah... strategize ppl!!! hehehehe.... overall, it was fun! and the gun was very heavy but it was worth it =D here are some pictures i managed to snap before i played. and oh if you were were wondering where i got shot, it was on a sensitive part of my chest and yes, there is a mark even though the person who shot me was so far away... i did feel the pain when i was shot and after... i was just very unlucky not to have lovely and colourful paintball bruises to show off... hahahah 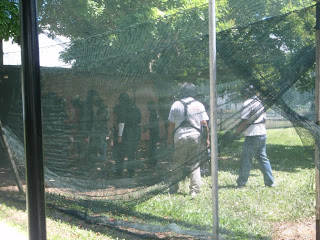 people who were already inside collecting their guns and testing them before they started playing. 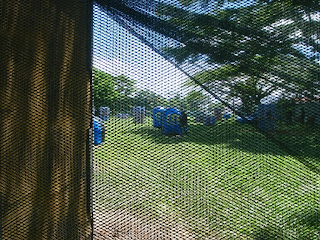 the bunkers which can protect you... good hiding places =D 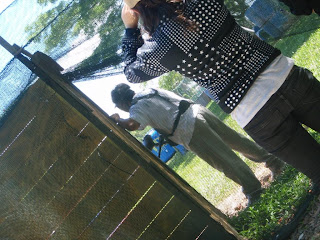 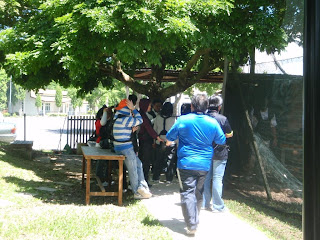 people getting geared up before the game.

That was last weekend, an oh yesterday was a public holiday because it was HM Sultan of Brunei 64th Birthday so i had the day off, i did not do much except catch up on sleep and to recuperate after the tiring weekend. I did however went out to Tarindak D'Polo Jerudong Beach cafe for their ceasar salad and cucur... my older sister, karen went there with they guy she was dating and then myself, kathleen and kak mai followed up after that... i should bring my camera there next time to take pictures of the beach... i really love the scenery there and the food and also that hot waiter. My older sister, karen decided to ask the cute waiter's friend his name and now i know his name and also the waiter that we questioned... hahahaha.... it was so embarrassing and yet so funny... so yeah, i know know both his name and his friend's... will i do anything to action on it? i don't think so... i'm a shy person so i won't do that until i've really lost my mind!!! hahahahahah =D

And oh just tonight i went to the Brunei Speaker's Group 11th Installation Dinner at Ilotus! it was fun and zana was good at singing the mandy moore's only hope... it was an interesting and fun night, i really did enjoy myself =) so yeah, i guess that is is for now, i'll try to blog soon =) muahz!