Hellew !!! so i have disappeared for quite some time... i've been both preoccupied and lazy... hehehehe... work is as usual, a bit crazy. Plus it's soon to be the 1 year anniversary of my father's passing and also in a few months, i'll hit the 3 years mark working in the bank! 3 years, lets hope i can last another 12yrs before i retire and move on to better things =D

Ooohhh... i recently attended a cousin's wedding, both her husband and herself are very young, most probably around 22 or 23 yrs old. What was funny was, during the wedding she had 2 emcees, a male and female. One speaking in English and the other in Malay. So you know they randomly said things and the most bizarre thing they said was and i quote "Both the newlyweds are currently working in Brunei Shell Petroleum eversince they finished their studies." okie. need you tell the world that you're working in one of the best paid companies ever? i must admit, the wedding was very grand and all but need you spend that much on your wedding and show it off to the world? And the hantaran, Diamonds and Platinum! 1 full set!! do you know that it cost u so much to buy diamonds from that place? Did you know that the quality of the diamond is the same as Taka in Singapore, and Taka can give you a better , more sparkly set for cheaper. Ohhhh.... lets not forget the Cannon DSLR (i think) and the Tissot watch! So you know what i said to my sisters, i told them we should also have a wedding as grand as that and then we get the emcee to say "Both the bride and groom are currently unemployed, so any monetary contributions will help them a long way. Thank you." hahahahah... i'm no hater for grand weddings but announcing to the whole world where you work, that's just plain showing off. And spending so much on your hantaran, you know that the items they got probably came out from loans and stuff which you have to pay off your whole life. For me, i would have a simple wedding, around tea time maybe by the beach. D'Tarindak Polo Beach Cafe looks like a good spot for that.. hehehehe ;D

So yesterday, i tagged along with my sister to Heidi's house for a makeover. My sister volunteered to be Heidi's model and when she saw me she decided to do me too!!!! Yay!!! That was my first time at a makeover!!! It was so cool, i really look like a different person, plus my eyes are a bit small...hahahaha... who knew i had chinky eyes right? hahahaha. Overall, i had fun, i really enjoyed the makeover and i will be getting Heidi to do my makeup for a bank event coming up on the second week of june =D)) Oh yeah, if you want to check more of Heidi's work, pls visit her website here. i think my picture and my sis will go up on Monday, i'm very excited!!! heheheh =P 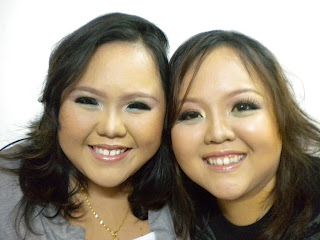 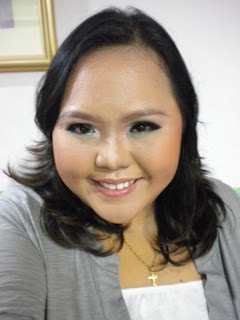 Just need to do something with my hair next time. Enough said =D
Posted by KeL at 9:04 PM