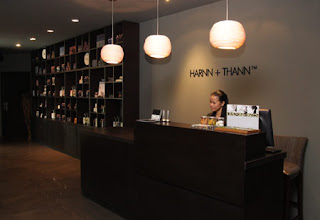 So that's a picture of Thann Spa at Kiulap, it's opposite Jungle Gym. Well on saturday, i decided to use my $50 bday voucher from my colleagues.... yes... the voucher has been with me since March and it was a good thing that it expires in 6 months... i still had a couple more days before it reached 6 mths =D. I was at Le Taj on Friday night for a sungkai dinner with Rosie, Azre, Rai and Sabeeq. That was when i took the opportunity to book a massage for myself before i put the voucher to waste. I'm not a really big fan of Indian food but LeTaj's sungkai buffet was $14.80 and the food was not too bad. They had quite a good range and i love the setting over there. I had a fun night laughing with them, esp sabeeq... He is one crazy dude.

Back to Thann spa... i did not want to do a full body massage because i was afraid of the pain so instead i opted for 2 treatments that cost $25 each. The first one was the back, neck & shoulder massage for 30mins and the other was the foot reflexology for 30mins. The setting of the spa is really beautiful. I was led to the room inside and they place you on sofa chairs, it was dim with soothing instrumental music playing in the background. The back, neck & shoulder massage was really good, i felt. They asked you if the pressure is alright. They also got me to soak my feet because i was going to do a foot reflexology. Then it was time for my foot reflexology, i had the choice of to either sit up and watch or lay down. Well i decided to lay down... and i fell in and out of sleep. I could even hear myself snoring... that was how relaxed i felt! The foot reflexology did hurt at some point but it did not hurt that long so yeah... it was a good massage day =D

Puasa... hmm... a good time to gain weight you know... Last week itself i went out 3 nights in a row to sungkai with friends and then there was a lil cuz bday on sunday. Wednesday, i went to ILotus with my friends from the Credit Admin team... for $16.80 it is worth your money!!! so much range to choose from and they have the grill section. The grill section is where you pick out lamb or various seafood and they will grill/panggang it for you and deliver it to your table. Again, i'm not much of a seafood fan but they had lots of other food for non seafood lovers like me. There was rice, noodles and i think over 5 types of dishes to go with it. Then there was the cucurs and all the fried food like sausages and fishballs or chicken balls. Yum!!!! I'm headed back there this thursday =D. Then thursday the next day, i went to Fratini's in Sg Tilong. It was a last minute plan for me to join my Credit Admin colleagues. The promotion - 50% off pizza and pastas before 7p.m. Fratini's is a bit pricey, but when there is promotions like this, you sure would not want to miss it!. I had fun, eating pasta and pizza. The pasta i ordered came in a really big portion and i was full, plus i had 4 slices of pizza... yeah... i really do pig out XP. Then Friday was at Le Taj! Le Taj also did serve ice cream and a bit of pasta and pizza... not too bad too.

Saturday night, i had a cousin who is here for a bit before she goes back to Germany. Our other cousins decided to celebrate her son's 2nd bday so there was plenty of food!!! I had the taufu-fah and some chicken soup... I did not pig out this time bcoz, i ate a lil bit before we came there. There was also fried popiah with banana as a filling... weird but tasty becoz the banana was sweet. As usual, the aunties went a bit wild and dirty... hahahah... For those of you who really know me, then you know how dirty i am... well, it runs in the family! Then Sunday... ahhh... i went to church because i decided to save a life by donating some of my blood. I finally found the kain i was looking for. Then i to a short nap before going to KB. What's in KB?!? FOOD!!!! AHAHAHAH.... I revolve around food ya =). Sharin, future-bro-in-law, has a stall there with his friends. We went bcoz my sister, katherine wanted to buy food from the darling. Across Sharin's stall was the Abu stall, they sell the best roti telur and roti ayam ever!!!!! Yummy!!!! This time round i decided to buy the roti ayam. The roti telur was $1.00 and the roti ayam was $2.50! well worth my money. I also bought Sri Kandi's chicken kebab... yummy but i prefered if they would strip all the chicken off their skin.

So there you have it... my food adventures... will update if i have tride new places. =D
Plus... it will soon be 100 days that our dad has left us. I still do think of him a lot and i do feel his presence at times. As usual, life has to go on and we have to move on but his memories will live in us always. xoxo, KeL

*i have never understood why you were so proud of me, now that i know why, i still don't understand it. One day i will be able to understand it... but not now. i still have so many answers to look for*
Posted by KeL at 8:48 PM