Hellew all... well i have been baking/making things lately.... There are some days where i feel that i have extra energy to burn off so i tried to do something useful... to make something from scratch... hehehehhe 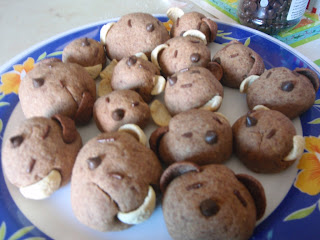 Here are my doggie cookies.... hahahah they look funny and were of different sizes. the whole batch was supposed to produce 48 cookies but i ended up with less then 20 i think..... hahahahah... never the less, i will try this one again =D

The above is called Doggie Cookies, this lady had two versions of it; one horlicks and one milo. Click here to check it out... she has plenty of cool recipes. look how pretty her ones look 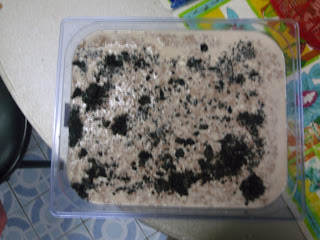 This dessert is a failed one... hahahah.... not very successful... it was supposed to be a Oreo Dirt Pudding and it did not turn out right.... this one i will NEVER attempt again.... hahahahah.... i'll just stick to my usual peaches and cream ;D 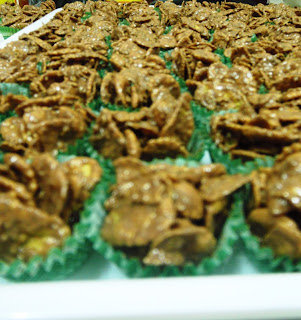 And this one.... Choco Cornflakes.... i had an order for this way back in June from my kakak angkat Di Wi... hahahah... only 2 weeks before puasa ended i decided to reconfirm how may pieces she wanted and she told me 400 pcs!!! So i only made one batch earlier this week and the rest yesterday afternoon... it is tiring!!! And guess what i have 2 more orders from 2 other people... Well i was out just now and i wanted to buy some cookie cutters, there was one in particular that i saw from Giant a few weeks ago and it was shaped like the playboy bunny logo. Sadly, i could not find it today =( Anywhoos i think i will be baking or making something within the 2 days holidays.... yay!!! that is it for now... will update soon... <3 xoxo