A blooming tree in the background 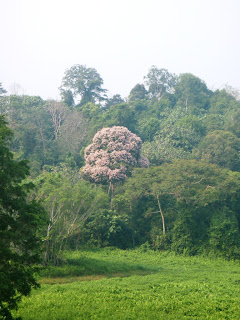 Hellew all... so i have been very busy lately... I have now moved to my new department, i must admit i was overwhelmed at first, i'm now trying to get the hang of it... i just to remember the steps of how to do things... My last few weeks before i left for my new department was hell as usual. I had so many things to do and yet there was still so much that was pilling up on the side. I tried to finish as much as i could. Then i went on a short trip to KK and it was fun... I was sick when i was there... There was plenty of eating but there was a point where i could not eat because i felt really bad. Other than that, i did get panicky when i went to Centerpoint because there was so many people and they were literally body to body. I don't know how i did it in Singapore. I did not shop till i drop there because they did not have the particular stores that i wanted. I did have fun going everywhere and guess what? i just booked my ticket to KK in December for the weekend. Cheap fares though $59 return! And as usual, nothing beats Singapore! =)

If you are wondering about the picture above, well its a tree far away from my back garden. It actually caught my sister's attention and she took a picture of it. Me being a very curious person myself, i decided to take a picture so there it is. We have never seen any of the tress back there bloom so we found it quite strange.

Other interesting things that happened today, I got my half yearly rating and i got a 3 Strong! Yay!!! i actually felt like i did not accomplish what was set for me, because i had so much work pilling from everwhere... The good thing was, i did entertain internal customers and i go all the way to help them. That was actually not part of my job scope but since i did it was recognized by my line manager in the other department =D well dealing with internal customers was a good experience for me because i made a whole lot of new friends and aquintances plus i know who i can ask favours from now.... heheheheh... Then we had late breakfast around 9+++a.m. The food was great, noodles, chicken curry, fried chicken, sandwiches and a whole lot more, i made my dessert, peaches and cream. I had trouble making it because i could not find nestle cream so i had to find a substitute for it which was Paul's Thickened Cream Light. It only had 6 hours to sit in the fridge and the cream was still a bit watery, it did not freeze a bit. Overall, they all loved it... which was quite goo and i was very surprised to see that, they only left 1/10 in the container.

The week went pretty fast for me which is good, i hope to have a good sleep in tomorrow. Sleep for me now has never felt like what it use to... i feel more refreshed when i wake up everyday, it was nothing like what i used to have so yeah maybe it's because of less work worries and stress... hehehe... well, i'll try to update more often but hey no promises on that... =P Bubyez... xoxo
Posted by KeL at 9:04 PM